This is a story about Sharplaninka (sheep dog) Stella, talks about creating a new family, when your own family will reject you or you lose it. 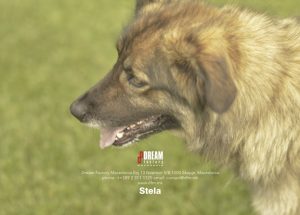 Stella is an adult dog that is loyal to hers boss Hhristo. They have been together for 10 years. Stella was a puppy when Hhristo has found her. Stella’s father has been used in dog fights. One of these dog fights was fatal for him.Stela stayed with her mother until her motherwas fatally injured wile keeping the sheepfold, one night by the wolves on the mountain. They have been snowbound and looks like both be dead. But then under the snow comes out muzzle of Stella. Stella licks her mother and pushed her with muzzle, but the mother does not get up. Stela wander around through snowstorm. She will be found by Hristo who comes to live in the sheepfold on his 45 years. He saves Stela. He founds outher drifted and half-dead, heats her but does not care much about it. Stella misses her parents, her family, especially the mother who was taking care for her. Puppy yowl like a cry for the lost of her family. Hristo at the beginningdoes not pay much attention to Stela, because he is disappointed with life and his family and wants to be all alone. But somehow, Stellastarts connecting to Hristo.Small puppy sees Hristo as mother and father, as her only family. Hristo accept her because she did not bothers him. Together they eat, walk along the mountain, enjoying the silence, without saying any word.It looks like they live beside each other, yet their lives are so intertwined.

Nicholas is a child of a contemporary mixed Macedonian-German family. His parents are always busy with work, dealing with him without desire, just to give him to eat and take him to school. There is no real emotional family relationship. As times goes by, his parents completely stop talking to each other. There is nothing more between them, but it looks like they are too lazy to divorce. Nicolas is emotionally child who tries to make his parents somehow to communicate, but those attempts are useless. If they want to say something to each other, they say it through Nikolas. They are so used to the situation and for them everything seems like normal. Nicolas is increasingly withdrawing into himself, sitting hole day at his computer, wile his parents are not noticing that. One day Nikolas stops speaking to themcompletely. They carry him to a doctor, but there is no response, he just does not want to talk. Even then, Nikolas manages to garner attention to himself. His mother Anke falls into depression be- cause of this situation , she needs to be alone, so she moves away to her parents in another city. The fatherAlexander is left alone with Nicolas. He is desperately trying to reach out to him, but now the situation is reversed. Nothing can make Nicolas to speak. Alexander, the father of Nicholas,decides to seek help from his father, Hristo, who had not seen for many years. Their family falls apart many years ago, when his mother decides to leave them and marry a rich widower with children. Faithfulness of Hristo was the most important thing in his life. After this experience with his wife, Hristo he decides to escape from everything and go to the mountain, to stay and live there. Alexander remains with his mother, stepfather and his children. he is missing his father,because they were close. After that, in the teenage years he was interested only for girls and he does not stumped with family affairs. Now, after many years, Alexander need a favour from his father. He goes to Macedonia and brings Nicolas to his father Hristo. But Hristo is not friendly to Nicholas, because he is still angry at his son, who has not even tried to find him for so many years. Alexander has his pain and his truth on one side, but at other side he is not angry, he is still happy that he sees his father after so many years. Hristo has became coldhearted like the mountain, nothing touches him, he does not want people around. He is not happy when he realise that Alexander will leave Nicholas with him, and go back in Germany. Hristo did not communicate with Nicholas at the beginning.

Stella feels that she has to protect Nicolas, so she is constantly around him. He still does not speak, but through the time, between them a special bondwill be born. Nicolas will not speak for some time, first he will starts to bark, so they will understand each other. Stella will always be around Nicolas.Hristo for the first time will start to yell at her like he is jeal- ous. Until one moment when Hristo realise that the little Nicolas is rejected by his family at the same why like him many years ago, when he decided to runaway and come to live alone in the sheepfold.

Alexander and Anke returns on the mountain after realising that they cannot live without their only child.The two of them are getting back together only to return the child. They found Nicolas in joyous atmosphere, playing with Stella. But when he sees them, he is again disappointed. His mother is calling him, but he will not say a word again. When his mother tryto approach him, he will escape. Stella goes after him.Hristo will bring parents into the sheepfold.He is now softened, is not the same one. He will talk to them, but the mother is still not comforted. Hristo assures them that there is nothing to fear when Stel- la is with him. But after two days, Nicholas is not returning home, nor Stella. Now Hristo is concerned.Nicholas is hidden in a some deserted house with Stella. He steals from the fields and orchards to feed himself and did not return home. Stella is beside him but she is somehow sad that she is not by Hristo. Hristo also did not feel right without Stella and now without Nicholas. Mother’s persistent to call police. Hristo decided to go by himself to look for them.

One night Stella listen to the voice of Hristo who is searching for them. She wants to go, but Nicholas does not moving. Stella pulls Nikolas, but he is determined not to go. Stella leaves him and he goes ahead of Hristo. Hristo is very happy to sees her. Stella leads him to show him where is Nicolas, but he is no longer there, he has escaped. Now Hristo is frightened, because he is alone on the mountain. Parents cant hold this situation anymore and are calling the local police. Hristo and Stella together with Nicoals parents and police, are searching the mountain and local forest. At one point, Stella sees Nicolas. Standing still and looking at him. Nicolas give her a sign with his finger to be silent. Stella, does not want to release Nicolas and make treason against him but believes that his action is not correct. Stella starts barking. Nicolas looks briefly with disbelief and began to run away. But all together are coming to the barking of Stella and Nicolas was found.They all return at the sheepfold, Nicolas is angry, does not want to talk to anyone. He is angry at Stella. She turns around him as if to tell him that for his sake it done, but he is stubborn and does not want to hear.  Hristo advises parents to leave, to leave Nikolas a little more. Alexander and Anke go, but barely. As for the second time to lose their child. But Nicolas did not want to break down and he does not say a word, but his parents knows form Hristo that Nikolas previously has spoken.It remains on his new family – Hristo and Stella – to persuade him to give another chance to his parents.

Defining Oliver is a story that centres around Oliver, a 53 years old physics professor who lives a life of solitude. The reason that he lives a solitary life is that until now, he never had a relationship, sex or ever masturbated in his life. He is an introvert person that has no friends. A person who is confused about his sexual orientation. His only “friend” is his doctor, dr. Alexander Markovski, a 65 years professor of psychiatry, very prestigious in the field. Through his career, he has many interesting cases, but non of them can compare with Oliver’s. He was fascinated with Oliver, and because of that, Alexander was particularly dedicated in his case, and was challenged to help Oliver define his sexuality. One day, while waiting for a scheduled session, Oliver meets Katja, also a patient of dr. Alexander, who came there by mistake, thinking that it was her session. Katja is a 45 years old successful fashion designer, and she’s a complete opposite of Oliver. She’s open-minded, free spirited woman. Oliver finds Katja very intriguing. Katja asks for his phone number just in case he want’s to trade sessions sometimes.Oliver and Katja start to hang out. He learns that Katja is bisexual and the reason that she visits dr. Alexander is because she is depressed. The cause of her depression is because besides her big sexual experience in her life, she never had a meaningful relationship. Katja learns his story as well, and finds him very intriguing. To her, Oliver is the perfect example of a pure human being. After spending some time together, they both develop strong feelings for one another, and with each other’s help, they manage to re-discover their sexuality, and embark on a journey that will re-define them in essence. 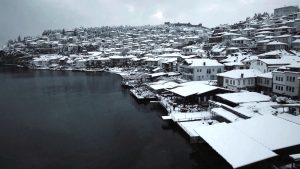 Nikola leads a mundane life in a small touristic town. He spends the last years of his life as a widow. His wife died 10 years ago. He is used to living his life as a widow. The only people who pay him visits and check his health are his neighbours. Nikola is fully aware that his time is ticking. He spends the last track of his life in silence, thinking about everything that has happened to him, the moments of joy and sadness, the point of life, the decisions he made, the things he’s done and the things he didn’t do. But one day during the winter, his peaceful life will be suddenly interrupted by his only grandchild who he hasn’t seen for more than 20 years. His grandchild brings back a lot of memories and Nikola advices him not to make the same mistakes as he did when he was young.

I was born in one communistic country that doesn’t exist anymore. It was called Yugoslavia. Our president of Yugoslavia was called Josip Broz TITO, and he was very famous around the world as a modest, family man . For me he was like an idol, but after 30 years i’ve realised something else. He was more than that, he liked beautiful woman, jewelry, expensive cars, unique watches, speed motorboats and smoking cuban cigars.

He was everything but not a modest guy as we where all thinking. He was the only real Playboy in the Communistic world. This is a film about another perspective of my Communist world.