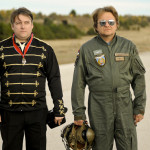 A mild-mannered dreamer’s absurd plan to spur tourism in his dying village goes spectacularly awry in Darko Lungulov’s “Monument to Michael Jackson,” an endearing tragicomedy that mixes caustic Eastern European humor with sharp social commentary. In telling the story of one man who makes a sacrifice for his community, the Serbian writer-helmer stylizes his second feature (after 2009’s “Here and There”) as a Balkan Western of sorts, satirizing the moral malaise clouding postwar Serbia while also illustrating the country’s problems with yet another generation of fanatical nationalists. Following the pic’s Karlovy Vary premiere, additional fests will venerate this “Monument.”

The action begins in a dusty, decrepit village in rural Serbia, circa 2009, where the local council finally gets around to removing a communist-era statue from the central square, leaving only an empty plinth. Although it is not stated outright, this is Lungulov’s neat visual shorthand to indicate that while the WWII heroes of socialist Yugoslavia may no longer be politically correct, the not-so-distant civil wars that created a separate Serbia failed to supply new warriors to celebrate.

Across from the square works the protagonist, slightly pudgy local barber Marko (Boris Milivojevic), a poetic dreamer, whose flights of fancy once earned him the love of his life, Ljubinka (Natasa Tapuskovic, spunky). But Marko’s perpetual optimism, seemingly ungrounded in their grim reality, led Ljubinka to leave him. More than anything, Marko longs to win her back.

When Marko hears the news that pop idol Michael Jackson is preparing a farewell tour, he hits upon a harebrained scheme that could bring his hometown and business back to life, and elevate his stature in his wife’s eyes. At a local council meeting, he proposes erecting a statue of the singer in the village square, something that he believes will attract bus and plane loads of foreign tourists.

Although Ljubinka is not impressed, Marko finds support from the Orthodox priest (Ljubomir Bandovic) whose wheelchair-bound teen daughter, Jelena (Emilija Terzic), is the singer’s No. 1 fan, as well as his bemused, ex-military pilot pal, Dusan (noted thesp-helmer-producer Dragan Bjelogrlic), who is keen for the airport to reopen. Ever optimistic, Marko commissions a statue of Jackson from his gypsy friend Doki (Toni Mihajlovski) and through Jelena, he invites the Gloved One to attend the unveiling.

Unfortunately, Marko’s plans also draw a number of opponents, including the corrupt local mayor (Branislav Trifunovic), whose backers have alternate plans for the airport land. When Jackson appears to accept the village’s invitation, the Mayor helps to plan the festivities, but secretly invites members of “Pure Serbia” (repping the type of violent nationalist group that wants a larger, ethnically pure Serbia) to disrupt the ceremony.

In a British or American indie pic, this sort of quirky, slightly bizarre setup would likely lead to the community pulling together to help the underdog, a la “The Full Monty” or “Local Hero;” here, instead, it serves as a platform for Lungulov to deal with difficult contemporary issues (ugly nationalism, political corruption, a moral vacuum and absence of real heroes, dying rural villages) in a subtle, humorous yet still emotional way.

Working again with German lenser Mathias Schoeningh, Lungulov shoots in widescreen, using locations full of earthy colors that support the Balkan Western feel. Marking a major step up from the small-scale, freewheeling “Here and There,” they orchestrate an extremely complex penultimate scene involving 300 extras, a military helicopter in flight and a stuntman hanging from a ladder, while a special anti-riot police brigade fights with a bunch of wild hooligans below. And it is in this crucial scene that Lungulov masterfully changes the pic’s tone from comedy to tragedy.